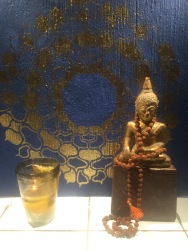 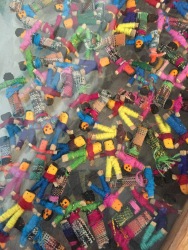 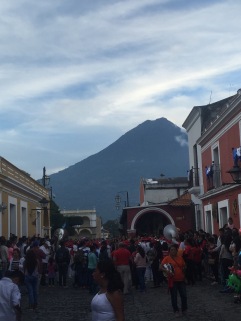 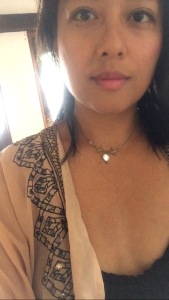 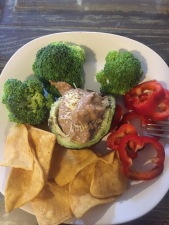 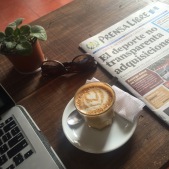 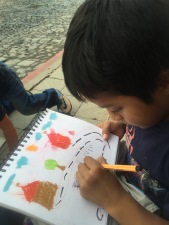 I have a hummus dealer. (Yes, it is absolutely ridiculous to admit. And, just go with it.) I have a hummus dealer who not only makes the best cilantro hummus ever, but the bloke is a tall glass of water. And, it’s an attractiveness that has never gone to his head. Nobody sent him the memo informing him that he’s handsome. So conversations are comfortable and the awkwardness or weirdness does not exist. This is real, straight talk – no arrogance, no lies or bullshit associated in our weekly communications. At this point in my life after the hellish unraveling my personal life has endured, it’s a much welcomed relief.

In a very comforting and inspiring way, he has figured it out. He has a good rhythm to his day. He walks his dogs in the morning and shows up to work at 10am and leaves by 6pm. If you have ever worked in event planning, catering or any hospitality job, you know he is set. As a small business owner myself starting over in a new town, I don’t even want to reveal to him what my working hours are right now. I will not compare myself to what he’s spent months figuring out when I have only lived here for four weeks. Creativity does not have the same billable hours as far as I’m concerned.

He glances up saying, “You look different today.”

“Yeah, I decided I need to relax more. I realized that I act like I still live in America. I was stressing myself out over how I think it all should be. It’s exhausting living like that. In the end, it usually works out.”

He looked directly into my eyes with a calm and gentle focus and simply said, “It always works out, Nicole. And, remember, you live in a third world country now.”

Over the last month living here, I have succumbed to those two realities. My achievement junkie persona has been beaten down a significant number of times. I can’t control everything and everyone anymore. And, I really don’t have to force anything. I have realized when I relax, the quality of my work and my art improves. Antigua is changing me, softening me, and molding me into a new person.

So what’s it like transitioning from my event planning and yoga teaching life in Houston to becoming an expat entrepreneur living in Guatemala? Well, in a nutshell, I’ve laid my observations since moving here almost one year ago.

1) Time is very difficult to control.
Just forget it.  You don’t have control over time. I even set my watch to be 5 minutes ahead of time to create a cushion. Things that are completely out of anyone’s control will happen. A marching band, a protest or a procession will create road blocks in the street. A dead dog in the middle of rush hour traffic can cause every driver in front of you to stop and look. The shuttle bus driver can stop at the gas station and buy a pack of cigarettes and force everyone to go take a break. I have surrendered my time. I am always late to appointments here. If it is important, I have to pad in an extra hour to just deal with whatever random obstacle will inevitably happen. Life isn’t all about me. You have to meet life where it meets you if you want to survive here.
2) Mother Nature is in control.
I lived in Houston. I know not to mess with flooding and hurricanes, but this is a whole other level of crazy. I was walking in Cayala, a really posh open-air mall in my former neighborhood in Guatemala City. I was in a rush because I wanted to cross this really busy roundabout to get to a yoga class I was teaching. A police officer with a long rifle was yelling at me because they were trying to section off an area right in front of a Gymboree. I looked down at my shoes and I realized I was standing in a puddle of blood, two broken umbrellas and a really long tree that got struck by lightening. Apparently lightening struck a tree and killed two pedestrians. The bodies were already loaded up into the ambulance. I almost threw up right there, but I politely apologized and vomited a few feet away before crossing the street.

The experience gave me chills. When it rains, the weather can be unrelenting. If you didn’t go to the gym, pick up your water, or get your food from the grocery store, forget it. You work with whatever you have in your apartment and deal with it. Thankful for roof over your head, food in the fridge and a comfortable bed.

3) Trying to lead an American lifestyle in a third world country doesn’t work.
Being of integrity and being impeccable with your word are two things I have learned from living and working in America. If you say you are going to do something, I actually trust and believe you.

When it comes to wifi, responses to emails, and people respecting your time, forget it. The wifi can be very slow. There seems to be no set etiquette on when people feel the need to get back to you on emails or phone calls. I had a woman write me back a month later. We set up an interview to discuss work, and she had the nerve to cancel the appointment the morning of. It can be completely anxiety inducing for me. It’s related to my social anxiety when I get a bout of depression.

It is also completely normal for friends or business acquaintances to cancel or just straight up flake out. Also cell phones or internet seems to stop throughout the day. So you oftentimes can’t inform someone that you can’t make it to an appointment. It’s like living in a time when cell phones didn’t exist.

For the longest time, I became shy and meek because feminism really doesn’t exist here. I would freak out if a group of men yelled things at me. It didn’t even matter what I was wearing: shorts, yoga pants, slacks. Men will talk to you even police officers or bodyguards feel the need to catcall. I find it annoying and disrespectful. Sometimes I yell back depending on my level of annoyance for that day, and I have learned that it is best to just keep it moving. Latin America has a long way to go as far as providing respectful treatment towards women.

4) It takes time to get used to a new culture, new country, and a new language.
From my travel experiences, being in a foreign country was easy. (And, especially if you pick one of those “easy” countries, for example traveling to Montreal, London, Paris, Florence, and Barcelona.) I would just review the foreign language on Pimsleur and use my charm and my basic language skills. These countries have water you can drink out of a sink and they have easy to read road signs and a public transport system. I am not afraid to yell “Basta!” or “Non, je ne veux pas” to a lecherous man on the street or a gypsy in the train station in Europe.

Then there is that next level of foreign travel. I am talking about riding motorcycle taxis in Togo, being in a bus accident at 2am in the countryside of the Philippines and places where wifi and toilet paper are not considered necessities to their communities. The places where there are people selling you peanuts or sunglasses through your car window, where toilets don’t flush and where a family of four are comfortably riding a motorcycle on the road.

It is very easy to end up in an isolating pocket of gringos. You can easily just roll with a crew of Anglophones if you wanted to, and what’s the purpose in doing that if you live in Latin America. Depending on my comfort level, I force myself to step out there. There are days where I type in what I have to say and read it off of my phone in google translate. I memorize what I have to say for 15 minutes before I talk to a store clerk. Or I just simply walk away when I have no clue what the tortilla lady is trying to tell me.

A year into this regardless of the challenges and the numerous awkward Spanish moments I have had while teaching yoga in Spanish, trying to explain where I live to a taxi driver, or just trying to negotiate the price of a hammock, there is a charm about this country. Once you navigate your way around the rainy season, the mornings are consistently in the 50s and the highs are in the 70s. I live in a town surrounded by volcanos, have swam in thermal springs, and seen the sun set over Lago Atitlan. The natural beauty and the genuine kindness of the Guatemalans is very grounding and very calming. Life in America just doesn’t have that same intoxicating allure as it used to have. When I see the Pollo Campero bags at the airport and I see someone trying to sell me a bracelet or a handbag at the taxi line in Guatemala City, it just makes me smile because I am back in my new “adopted” home.

One thought on “Reflections on Living in Guatemala”